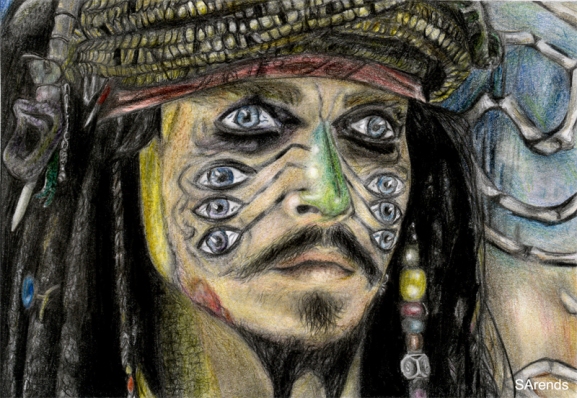 It was when Jack found his hands and legs tied unceremoniously to the gigantic cross, crumbling under its damned weight, sweating in the harsh June sun, that he realized something. He was in trouble, big time. The sentry nearby threw the whip again his sweating body.

“Ok, Ok. I’m hoisting up. It ain’t gonna happen if you keep slapping that damnation on my back. And, you don’t have all day, mate.”

He managed to stand up, his leg wavering like a ship on a stormy sea.

“How many leagues from here, matey?”, he asked the sentry.

The sentry looked at him unimpressed. Jack noticed the man had a stubble growing right out of his nose. A cute shrub.  The man didn’t look quite fearsome, though not for lack of trying. He decided against the wisecrack.

“A mile or so. And convicts be silent!”, the sentry screamed as he whipped Jack again.

Jack cursed under his breath. “Mate. Ye want to murder me afore the finish, smarting from yer cursed whip? And gimme some water before I meet Davy Jones. Unless you got rum. Pontius Pilate won’t be wild if ye spoil his show. Imagine Nazareth Chronicles…the headlines…Fake Prophet saved from Crucification. Dies of dehydration and pre-cross flogging. It’s gonna be a riot. And yer head’s gonna be on a spike. Or a cross or whatever it is you snoggers like.”

Damn Magdalena, Jack thought as he dragged his weight under the pressing cross. The maid had been the song of his heart ever since the night he’d read her dainty palm that starry night. With a little dance in her eyes and a merry hop in her step, she stole his heart faster than the whip cruising his back.

She’d been mighty dazzled with his ideas. About what a load of horse shit this whole Creator business was. He’d been a bit drunk that night after the stoning festival and had kind of rambled on. But damn her big mouth. Before time, she’d herded a whole bunch of pretty lasses, all eager to hear about how Jack thought Jehova was a narcisstic, braggart who needed to get laid pronto or have someone fix him a drink.

“To tell you the truth, mate. I have a tender spot for you lot”, continued Jack. “Protecting our lands and stuff. Punishing them sinners. Fighting them wars. All for a pittance. Eyy, mate” The sentry looked unmoved. But at least the man had stopped whipping. Jack decided this was a good sign. He had to think on his feet if he had to get out of this one. Or his hands, on which he were mostly now.

The crowd had gathered on either side of the path, booing and throwing toy crosses at him. Not much crowd participation in a crucification. Now stonings, the crowd loved, with a festive mood about them, especially the evening shows. All you could sell at a crucification was lemon fizz, although Jack could take ten of them now. One of the women spat at his leg, and Jack felt the cool touch of spit running down his thigh. If only there was a rain of spit. He wished they’d accused him of apostasy somewhere in winter when the sun wasn’t at its harshest.

He caught Magdelena among a group of women, when he chanced to raise his head, her face wet with tears, beating her chest in obvious grief. At least one lass that wouldn’t slap him by the end of this.

Suddenly, Jack smelled the salt in the air.  He heard a distant gawk, and looked up into the pale blue sky. His heart filled with mirth.  The green parakeet flew down and perched itself on an erected cross.  They had come for him.  The Black Pearl was near!  Just one last hurdle.

“So tell me mate”, Jack asked the soldier, “Have you ever been on ship? I hear Tortuga is in season again. ”